Why we need war?

Ever we thinking about, what will happen after any war?

After World War I & II, we have been listening about the next world war. We all know that during Second World War, nuclear weapons had developed and used. USA dropped 2 nuclear bomb on Japan in 1945 which caused a great lose to Japan. Due to these bombs, thousands of people died and many got injured.  It caused the ground temperature up to the 4000 degree celsius . The explosions were as bright as sun and covered the sky of cities. Due to radiation, the risk of cancer, skin disease and breath disease had got increased. Some people who entered the cities after the bombings to provide assistance also died from the radiation.

It is the only one example of side effect of the world war which held years ago and has impact on those cities till now. Those days, Only USA was powerful country to use those atomic bombs. If we will see the current scenario, every country has its own plants of Nuclear.  Beside this, they are even stronger than the earlier one. If world war III will happen, the result will be threatening as no one will be the winner in this war.  It will be the real one and will destroy everything or it can be end with the end of Human being. 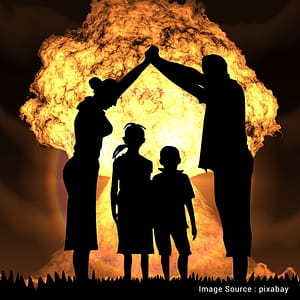 Many countries got prepared for World War III. They are taking tests of Missiles Launches on weekly bases.  Some have launched missile submarines and fighter planes. They are also developing megaton nuclear torpedo.

These are few examples, but Countries having a nuclear weapon, use to threaten another country with the nuclear attack.

Our problem is that we want to be No. 1 or Superpower in the world, but we forget the consequence of this. This is not the case of nuclear bomb or power. Few week ago the US dropped the largest non-nuclear bomb in Afghanistan, Which is known as the mother of all bomb?

Jeremy Corbyn once said: “I’ve made clear any use of nuclear weapons would be a disaster for the whole world.”

After effects of World War

If World war III happens, every country will use all the weapons which are developed by them.  Once they use these weapons the side effect will be worst as the smoke from these weapons will only be in the atmosphere which can cover earth for several years. Effects can be:

This article is not against any country or any policy, But we need to think about our Future.

Rape to humiliate, to dominate or to satisfy male ego?

What is our Moral Stand, for good Culture and Country?

World Environment Day: Just a formality or Our Responsibility towards Earth